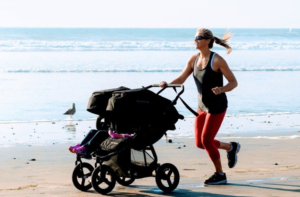 The gluteus medius (subsequently referred to as glute med) is a large, superficial muscle in your buttocks that attaches right at the top of the back of the pelvis (compared to gluteus maximus which is coming a little more from the central or “crack” area :)). This muscle is extremely important for running (and any other activity that requires pelvic stabilization)!  It works with gluteus maximus and adductor magnus (a muscle in your inner thigh) to stabilize the pelvis by providing 50% of the vertical support during the early stance phase gait (Hamner et al 2010). This means that as you load your weight onto one leg, these muscles keep you from collapsing!

Learn more in this 15 minute video on return to running with Dr. Kim Seymour, DPT)

So what is early stance phase? Stance phase is when one leg and the opposite foot are bearing most or all of the body weight. When you run, you’re in stance phase about 60% of the time. While glute med does not stabilize the pelvis entirely on its own, it does MOST of the work (it has the largest average peak force of all of the hip muscles [Lenhart et al 2014]).

If you aren’t yet convinced that glute med is important for YOU, keep reading:

When running about 7:30 per mile pace, women have a greater glute med EMG amplitude than men (Chumanov et al. 2008). What does that mean? In simple terms, it means that glute med is even more important for women than men when they run.

Women also have a greater peak hip adduction and internal rotation during stance and hip adduction excursion across the gait cycle, meaning the thigh and knee move inward toward the opposite leg more than in men.

When glute med is weak, this can increase hip adduction (thigh collapsing inward towards the center) when you run which can cause knee pain (patellofemoral pain to be more specific; Esculier et al. 2015, Wilson et al. 2011, and Neal et al. 2016). Now, let’s get into injuries a little bit, female runners are twice as likely as male runners to develop a running injury (this includes patellofemoral pain, IT band syndrome, and even tibial stress fracture). Furthermore, women are 4-6 times more likely to get a non-contact ACL tear compared to men.

So, we’ve proven glute med is important for women. Now what about pregnant women and women who have had babies? We know that gait changes during pregnancy to accommodate the growing baby in the abdomen. During pregnancy, there is a change in the frontal plane motion of the pelvis which makes it harder to propel the body forward (I don’t know about you, but I certainly like to run forward). Studies show that this frontal plane motion of the pelvis remained at 6 MONTHS POSTPARTUM! Which means that many of the gait adaptations we make during pregnancy, that are necessary during pregnancy but not postpartum, remain in the postpartum period and can affect our efficiencies with running long into the future.

(Click here to book now and get back to running WITHOUT injury or leakage!)

I remember hearing in PT school that glute med was the only muscle that controlled pelvic stabilization in single leg loading (meaning it was the only muscle preventing you from having an inward collapse of the leg in single leg loading). This never made sense to me, that a muscle that was so important would be so weak in so many people. Since then I’ve learned that glute med doesn’t work alone; it’s part of a team and this team needs to have healthy contributions from all of it’s players to be strong. So, we need to train the glute med with its team members! This is how we train the brain to use the muscles we want it to use when we want it to use them. We need to train glute med with the adductors and glute max. We need to train it with the pelvic floor and transverse abdominis, and even the diaphragm! We need to train it and strengthen it while working to provide a good central stabilization strategy for the body as a whole.

Starting to sound complicated? That’s what we’re here for! Come see us and let us help you keep that glute med a strong team member, and part of a strong team!